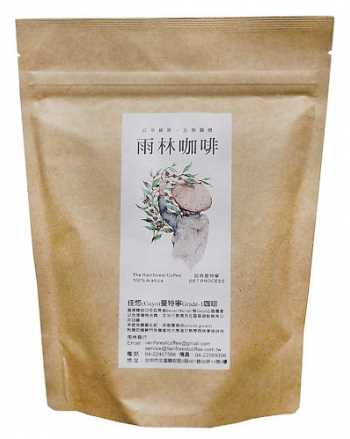 In 2007, Wu Zi Yu from Taiwan would have known nothing about coffee. However, after a stint of volunteer work for the South Pacific Tsunami in Indonesia, when he helped restore damaged communities, he gathered a thought. The bean that represented social history of slavery, colonialism and imperialism may just be the carrier of prosperity and independence.

From 2011 onward, Wu promoted Mandheling coffee from Indonesia. This is a coffee that is more fair than fair trade, and more tasty than a cup of tasty coffee. Wu being not a coffee professional in turn became an enabler to solidify his fair-trade vision of symbiosis of tropical rain forest with coffee-farming. What makes the coffee tasty is the process of dry-fermentation in the Sun with the pulp still on it.

- This symbiosis platform ties farmers' wealth and the rain forest for sustainable development. Wu and his team would supervise the complete process of pick, wash, sun-dry, sort, and pack, until the final products have reached Taiwan.
- Proceeds are put back into the nurturing and care of the rain forest.
- The coffee plants are grown in the Gayo Mountain Range in the Aceh region of Indonesia, next to the scenic Lake Tawar. Coffee connoisseurs name the coffee from this area "Arabica Mandheling coffee".
- With shade-grown permaculture protecting the Arabica trees from over-exposure to the Sun, these beans are in their best form, richly aromatic.

Asia's first dry-process Mandheling coffee
- This is a result of two and half year of research in the Aceh region in Indonesia.
- Using the most traditional dry-process, beans undergo natural fermentation in sunlight, and then naturally dried. The fruity flavour and carbohydrate are thus well-captured. Every bean represents the caring effort of the farmers.
- Dry process, also known as unwashed or natural coffee, originated from Africa. After harvest, the entire cherry is first cleaned and then placed in the sun to dry on tables or patios. Because the cherries would be under the influence of the weather, even minor affects from humidity could cause mildew to form on the beans, and then failure. Within 10-14 days, they are raked or turned by hand to ensure even drying as well as prevent mildew, producing the best beans.
- Coffee made from these choice beans are rich and fruity, with a mild and pleasant acidity.

What is Shade Grown Coffee?
- An age-old traditional growing method, considered to be the best for growing Arabica coffee trees.
- Without the need to remove the forests, coffee trees would thrive under the tropical rainforest trees. There would be no destruction to the ecosystem and the home to migration birds. Coffee flowers and cherries in the shade attract omnivores; thus, the shade in itself becomes a natural shelter and food source for animals, creating another ecosystem. This is one of the most environmentally friendly ways of farming.